My site is moving! You can find most of the content from this site here:
theengineeress.com
I'll post redundantly for a while before completely migrating over :)
QS folks patiently waiting for alpha testing results, your wait is almost over! Participants will be announced within the week!
Posted by Nancy Dougherty at 5:12 PM 1 comment:

Great news, everyone! We've gotten permission to allow some (limited) amount of alpha testing on non-Proteus employees! See below:

Proteus makes a torso-worn patch that characterizes activity, sleep and other metrics via accelerometery, heart rate, and surface temperature.. Additionally, a safe, ingestible sensor shaped like a tablet communicates the time of ingestion when swallowed.

The power of suggestion is real. Our own early experiments suggest that labeling ingestible sensors – Mindfulness Pills – with different attributes and taking them per self-defined guidelines can prompt positive behavior change through increased mindfulness and automatic correlation of ingestion and behavior. To learn more about mindfulness, visit: http://themindfulnessblog.blogspot.com/

Your proposal should include:

- A description of your mindfulness experiment and required supplies

The Real Power of Scheduling?

Not a single conversation on gamification goes by without a mention of a Zynga blockbuster. Entrepreneurs all over the world are salivating at the thought of their product, service, or site getting the time, money, and word of mouth that Mafia Wars and Farmville get. And the success of these games is becoming a gold standard for how to "gamify"- appointment-based dynamics, the "wither" effect, probabilistic rewards, social-network based gaming, badges, statuses- and most importantly, the recipe that uses those ingredients to make a viral and addictive product.

Of course, knowing what elements work isn’t as important as knowing WHY they work. And the best way to understand how game elements interlock to create engagement and addiction is to play (see this Extra Credits on how to play a game like a game designer)

After a few weeks of playing Zynga games, I found that overwhelmingly, the factor that kept me coming back was the scheduling, coupled with the well-recognized intoxication of leveling up (and oh, the cool new powers that leveling up unlocks!). The "wither effect" was a small factor- especially in Mafia Wars where it has little presence. But that wasn't where the powerful addiction came from. In fact, it came from something that was brought up in a habit design meetup in SF outside the context of gamification. It was enforced RESTRAINT.

When you finish a "round" of actions in a Zynga game, you exhaust your resources- energy, stamina, field space- you're out, and all you can do is wait patiently for the chance to play again several hours later. At the time, you don't WANT to wait- you want to get to that next status NOW- the status bar is so close to being at the end!!! AARGH! The magic is that they force you to stop gameplay before you want to. As a result, you don't binge and burn out. Instead, you constantly have the mindset of "I can't wait for the privilege of playing again". Having restricted resources is not a new feature in games, but Zynga is a rare specimen in that once your resources are gone, rather than diverting you to a new task or quest within the game, your gameplay is over.

This is exactly what is considered in habit design- if you are trying to form a new habit and "binge" on it (crash diet, or try to start stretching an hour a day right away), when the initial wave of resolve washes over in a week or so, you're burned out on your goal. One way to train yourself better is to start in small doses- never get to the point of satiation with your habit; take baby steps and keep yourself craving more.

One more clever Zynga twist: if you simply CAN'T wait patiently, counting down the hours until your next engagement with bated breath, there's 2 ways to keep playing!

1. Extreme social interaction- loop more and more people in on the game, and get gifts and unlock bonuses to extend your continuous game play. You get immersion, Zynga gets customers

So before you start adding scheduling and withering to all of your widgets, consider all the aspects of why this works for Zynga- it’s not just the "hey, come back in 12 hours- but less than 14 hours!". A big motivator is the fact that you're booted off against your will, planting the thought in the back of your head, "I can't WAIT to play again!" in a sustainable, lucrative manner.

Well done, Zynga! The rest of us- let's put it in our "Save the World" toolbox.

A few big fields that have been popping up recently are gamification, positive psychology, habit design, and biometric tracking- each of which is tackling the question "how do we become happier and healthier" from a different angle.
I created a presentation based on this (to see my script/speaker notes, click "View on Slideshare", and you can select to see speaker notes by the comments box beneath the slides), and have been continuing to research and explore the interconnections in these concepts. You'll hear more about it soon!
Gamification, Technology, and Feedback
View more presentations from Nancy Dougherty
*Clarification:
I know "Gamification" is becoming an over-used, ill-defined, loved and hated word. What it means to me is leveraging the types of feedback that makes repeating an action over and over again in a game so compelling- a much deeper, complex subject than just badges and statuses!
Posted by Nancy Dougherty at 7:51 PM No comments: 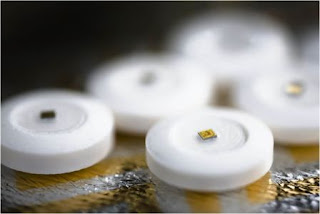 The power of the mood tracking experiments I've been doing is in ] part due to the technology used to do it- check out what sort of results I've seen in my presentation!

But I agree- it's crazy. This tiny spec on top of this placebo pill can talk to my phone. Let me explain how!

So the outer layers of this tiny spec (like the two outer cookies on an oreo) actually act as two plates of a battery, with some electronics as the "cream filling". When the pill hits your stomach, a battery is formed between the two plates and your stomach fluid (which is the electrolyte). When the circuitry in the "filling" draws load current, a current field is established in the stomach fluid and surrounding tissues that can be measured on the surface of the body. The signal is then decoded by a patch that you wear on your torso:


You wear the patch for 7 days at a time (in showers, at the lake, during workouts- its waterproof and stays on, so you slap it on once and forget about it!)

The patch also gets your heart rate (via ECG), your motion and activity (with an accelerometer- like the FitBit), and your temperature. The data is recorded 24/7, and sent to your phone every half hour over Bluetooth. It is them processed further on Proteus servers to give you information like sleep length and quality and activity levels, as well as timestamps and information on every pill that you took.

You can see an overview of data on your phone (sleep length, step count, pill timings, etc); we also store the raw data in case you want to dig deeper!

The patch I'm wearing above is our second generation- they're rapidly getting smaller and cheaper for more unobtrusive tracking!

I can't wait to get more mindfulness experiments going with this system- what sort of crazy things would YOU try?

Nancy Dougherty
I can't wait to lay a sensor network on myself and my environment, and use rich feedback loops to make me happier and healthier! I'm a hardware engineer at Proteus Biomedical (designing sensor systems) @nancyhd